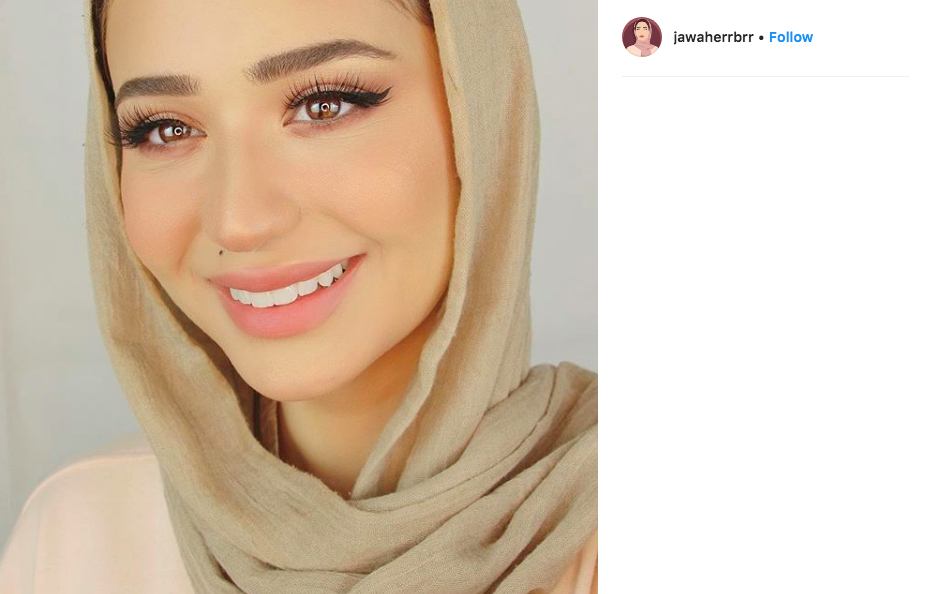 
If you type in ‘Hijabi’ and ‘Make-up’ into Google, you will find articles in abundance on how both terms are opposites. Hijabi’s who wear make-up are walking talking contradictions, right?

Yet, we’re seeing a rise in Hijabi models and make-up artists.

The relationship between hijabis and any kind of outward beautification is a complex one. Teen years are synonymous with exploration. During our teen years and early twenties, we explore different beauty styles and find out what tools we can’t live without, namely a decent eye-shadow brush and beauty blender. 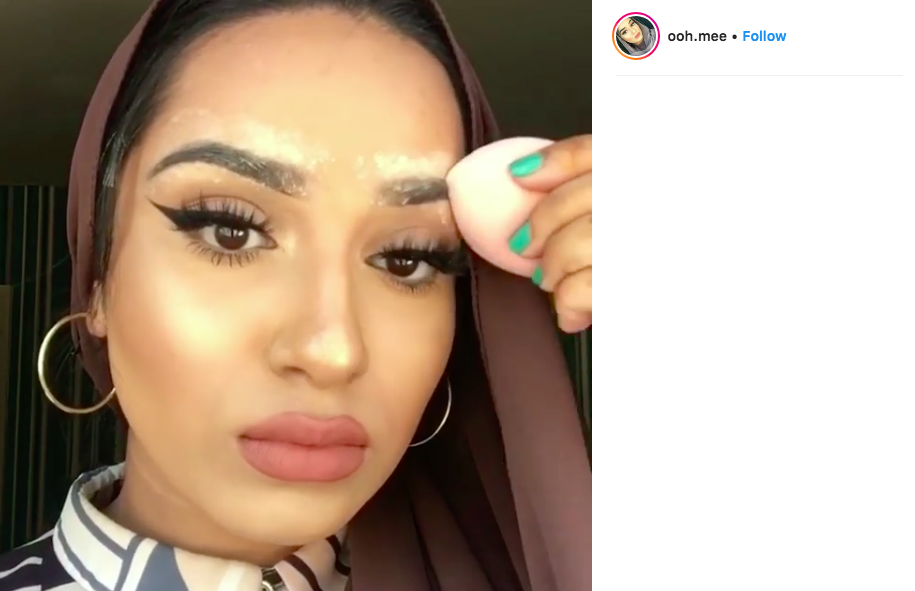 But while the discourse is mainly focused on whether makeup is good or bad, we are rarely seeing things from the point of view of the woman who is just trying to find her place in a world that will rarely forget that she is different.

I remember my journey. I wore hijab when I was 10, and started wearing make-up not long after that. My first shade of foundation was too fair for my skin – a commonality among women of colour who really had to search to find their perfect shade or be prepared to fork out the cash for the bigger brands. It was cakey and drying.

My teen years were spent silently worrying about becoming dependent on products. Around that time, my English teacher carried out an exercise where she gave everyone in the class a compliment. I remember smiling smugly as she said, “Zahrah, you have very good skin.”

I knew how to play the game. My make-up was subtle enough to make people think I was naturally pretty.

Later on, I’d hear from peers that I looked “really good with make-up”. Those comments are the type you’d keep in the bank to ponder over later on. During more emotional times you’d think of the possible negative connotations of those remarks – did it mean I was ugly without make-up?

However, those comments were a welcome anomaly amidst the flippant remarks by fellows Muslims and Non-Muslims alike – “What’s the point of wearing Hijab if you’re going to wear make-up, don’t they cancel each other out?”

Here are a few reasons why we’re seeing a growth in Hijabi Models and MUAs. It is, by no means, an exhaustive list and please do feel free to get in touch, or even write about your own informed experience on the subject.

The most obvious reason is creative expression. Everyone needs an outlet, right? Hijabis are obviously no exception to this. I had an Aunt who loved make-up and became a make-up artist only to give up the profession all together when she started wearing a headscarf. She now decorates cakes and I believe this is her creative outlet. It is really interesting to hear her liken edible glitter to bronzing highlighter. 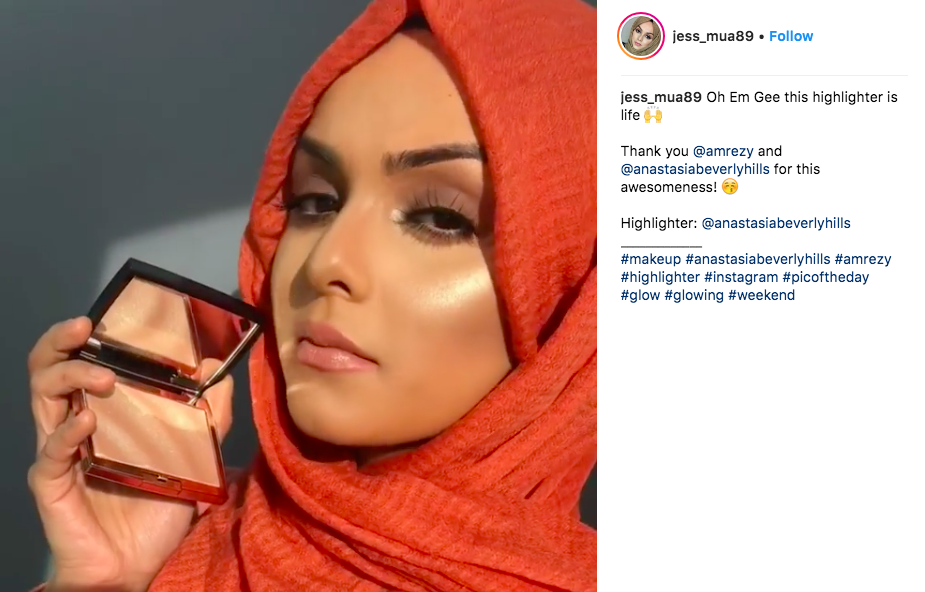 As Zoe Weiner puts it in her Bustle article, “Their (Hijabis) styles range from feminine and understated to bold and eye-catching, but there’s one thing each photo has in common: They show that these women love make-up, and use it as a means of expressing themselves.” Read the full article here.

We’re seeing Hijabis all over the big screen.

Nura Afia, who started off as a YouTuber, became a Covergirl model in 2016. As a follower of Nura from her vlogs back in the day, this achievement was so inspiring to see. She talks of her insecurities and wanting to break out of her shell here. 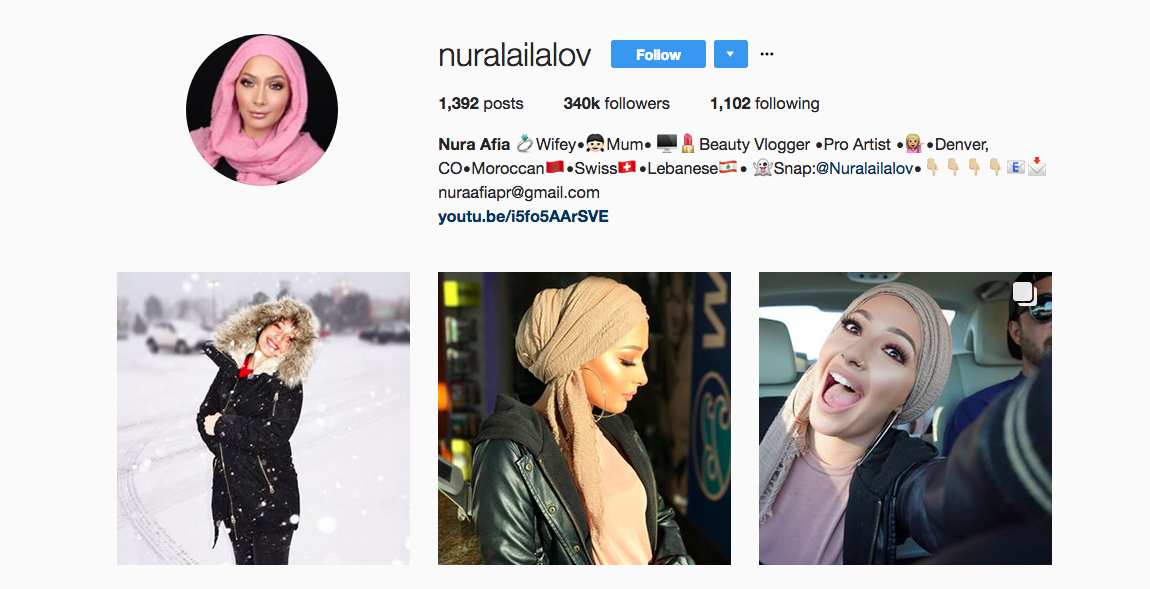 Hijabi representation on screen (even in smaller cameos) and the rise of Hijabi MUAs kind of go hand in hand. It’s a chicken-egg situation, which one came first? Each phenomenon spurs the other on. After all, if we’re seeing more Hijabi actresses/models, does that not increase market demand for specialized MUAs?

The Internet has been known for disrupting the established order. One could make the argument that some form of Hijabi MUAs have been around since the very first gathering of Muslim women, and YouTube, Instagram, Facebook and Snapchat simply are giving them the platform to have their work seen by a mass audience. 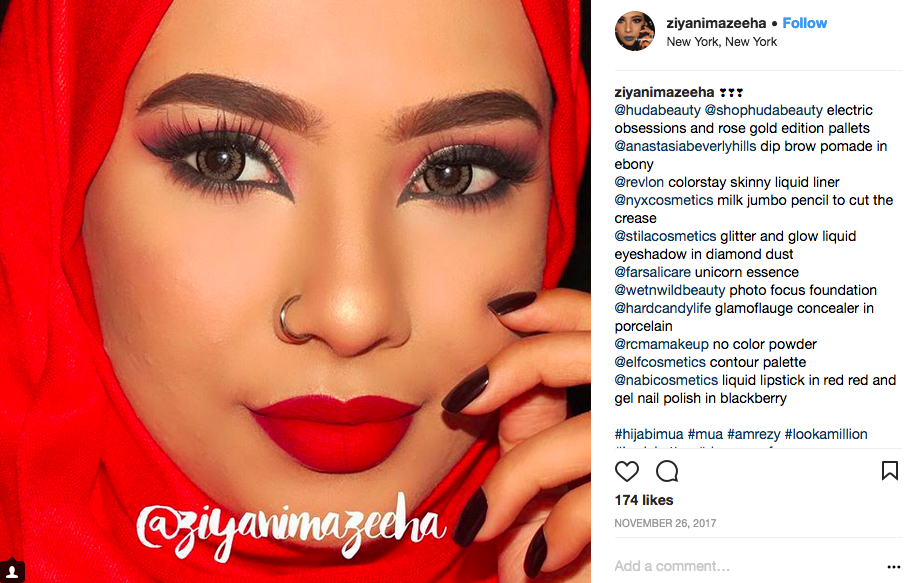 This, in turn, creates a network of like-minded individuals. One by one, people with talent and potential are spurred on to create their own website, or Instagram pages. While many can label this a cry for attention, I’d make the case that it’s more of a race for recognition.

I guess, with choice comes interpretation. http://www.bbc.co.uk/news/av/world-39279631/islam-the-world-s-fastest-growing-religion”>According to this BBC article in 2017, Islam is the fastest growing religion in the world. There are many, many sects, and, as any Muslim will tell you, we’re not a homogenous group. Though we all bear the brunt of stereotypes and prejudice as a kind of collective wound, there are so many variances within the Ummah itself.

Many Muslims will ensure their choices fall within a certain jurisdiction, and many don’t – and Allah knows best.

I had the privilege of speaking to Farah Syed, an MUA whose models frequently feature on the front of Asiana magazine, who shared her thoughts:

“I think it’s amazing that we can do a job in the field that we love. There was a time where I couldn’t get a job at any of the beauty counters wearing hijab. The only way I got my foot in the door was not wearing it. Hijabis are now empowering other women and going it alone and are able to show they have just as much talent as non-Hijabis.” – Farah Syed 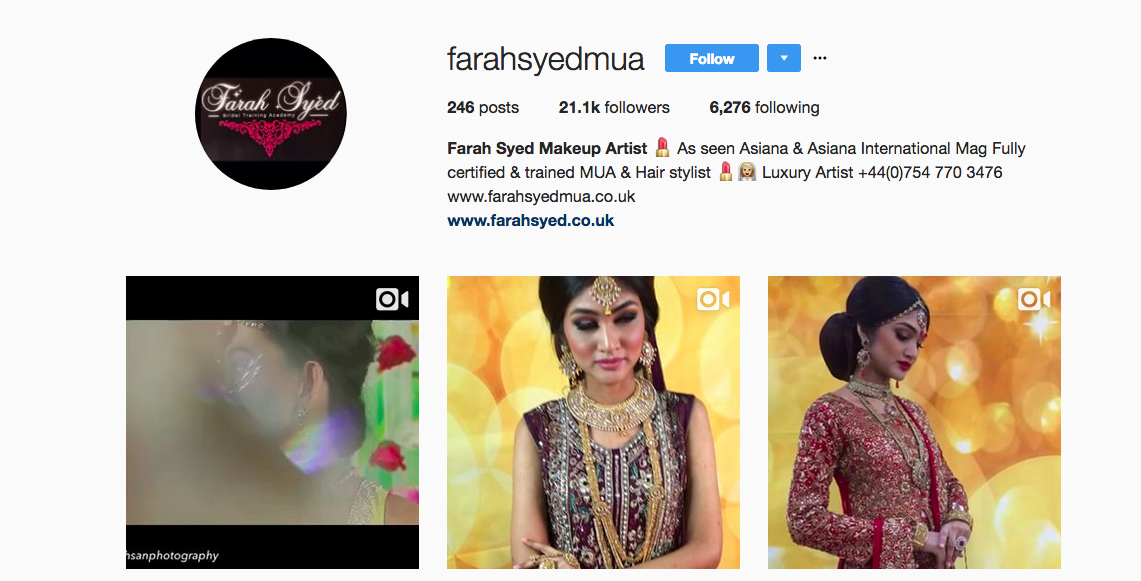 A boy I used to sit with in Year 6 said something to me I’ll never forget. “I think it’s really interesting that you wear a headscarf – is it because a woman’s hair is her beauty? And that’s why when women lose their hair – it can be really painful for them and really difficult. Because it’s what makes them beautiful.”

It really stuck with me as one of the most thoughtful remarks I’ve ever heard from a non-Muslim white male. It says volumes that he was only 10 years old at the time.

If a woman’s beauty and spirit and personality comes from her hair, this certainly translates into the way woman cover. Each Hijabi has her own style. But more than that, it’s how she dresses her face. 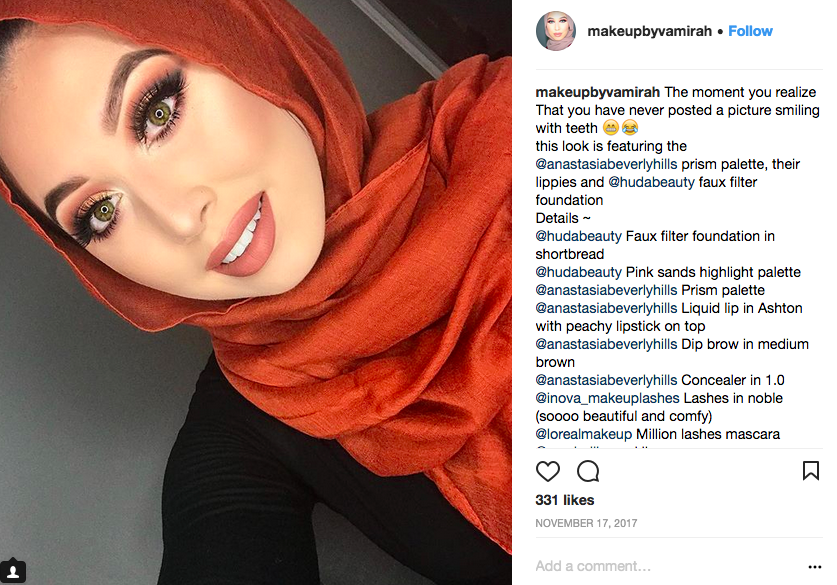 Hijabi’s, like every human being, are held to the same standard of beauty as everyone else.

We are called “cute” and “pretty” – “not bad to look at all” – which is all fine, right? Because we wear hijab to cover up our beauty, so why should we even seek those compliments?

A hijab draws more attention to the facial area. You learn early on to fold your hijab to make your face look as slim as possible. And sometimes you make yourself up in order to adhere to standards of beauty that are thrown in our face every single day.

If it is commonplace to see a white British girl feel so insecure about her weight that she yoyo diets, is it so bizarre to think a Hijabi wants to wear make-up because she wants to feel beautiful?

While this can be seen as conflating insecurity with merely wanting to look nice – why can we can so easily imagine one scenario, whilst the latter is constantly othered? Don’t we deserve empathy too? 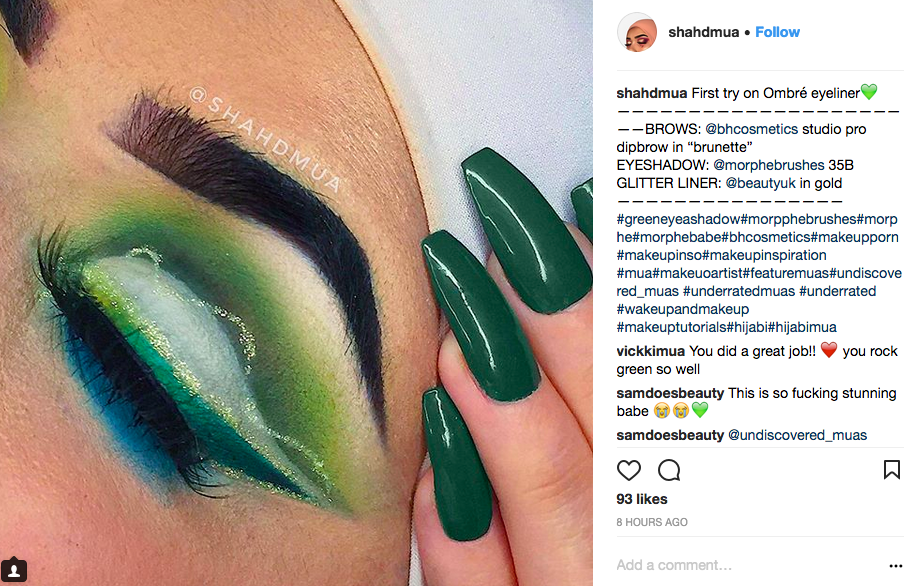 No, because we are not afforded the privilege of being complex and having other levels to our psyches.

In order to successfully ‘other’ a marginalized group – we have to overly-simplify their mindsets and personalities. There’s no room for complexity in the expression of our identity.