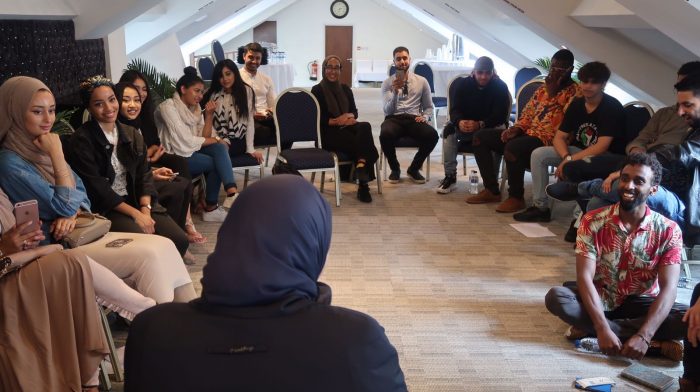 
Why even bring Influencers together?

We live in a very divided society.

From the outside, Islamophobia shows no signs of abating, and within, Muslims far too often fail to show unity with one another. This is often particularly the case within the Muslim Influencer scene – while many Muslims Influencers, whether in sport, fashion, comedy or music are all doing well individually – collectively these stars rarely come together. This is not necessarily deliberate, indeed, becoming successful often means focusing on yourself, but one of the main goals of M.I.N is to show that, together, we are stronger.

But how can this be done?

The importance of Unity within the Muslim Influencer community

As one of the co-founders of M.I.N, it has long been a dream of mine to bring Muslim Influencers together. Especially in today’s society: according to Forbes, ‘2017 is the year of the Influencer. Unlike the mainstream non-Muslim scene, where there isn’t really an ethical framework which binds everyone together, Muslim Influencers share similar, or in some cases, the exact same moral stances, share goals and ultimately – we’d hope – are doing it for Allah. And isn’t that the best cause to do something for?

So, it was with great pleasure that M.I.N – the world’s first Muslim Influencer Network, arranged a Muslim Influencer meet up in London in August 2017. We didn’t have much time to organise the whole thing – the event was dependent on a few key Influencers who only confirmed with us with a week’s notice that they were in the UK. With one week, and everything to organise – venue, food, audio/visual equipment, gifts and much more – we were rushed off our feet. But, deep down, we knew we’d pull it off. 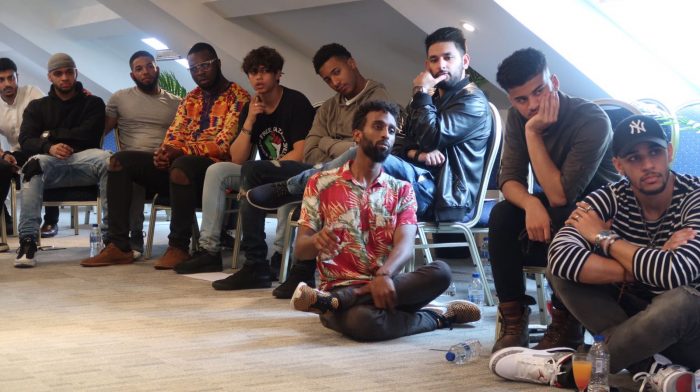 HarrisJ, Khaled Siddiq, Ali Official amongst others watch on with intrigue as our scholars deliver their reminders

A Room full of leading, influential Muslims in fashion, comedy and music

We hire out a cosy, well-decorated room, on the top floor of an event/wedding venue in East London, a 5-minute drive from Shoreditch. As the Influencers park up near the venue and begin entering one by one, it’s slowly becoming clear that this really is a unique thing taking place.

Sipping on posh drinks and snacking on canapés, the atmosphere becomes one of familiarity – even though it’s the first time many of the Influencers have met.

For a long time, they’ve been following each other online, yet it’s their shared sense of purpose, energy and excitement that unites them, a reminder what they can all achieve when they come together like this.

A timely reminder that what unites us all far outweighs more than what divides us.

We take them upstairs to a large room (usually used as a ‘green room’) for when there are performances, and as they continue to get to know each other, singers Faisal Salah, Khaled Siddiq and Mikhaael Mala begin to ‘jam’ together, entertaining the others to a freestyle. Under their chairs are envelopes, and we ask them to reach for them and open them up. For a few seconds all you hear is the sound of tearing envelopes, and then faces of light amusement and intrigue, as what they’re reading is an overview as well as key details about their social media followings, their most popular hashtags and which posts do best. 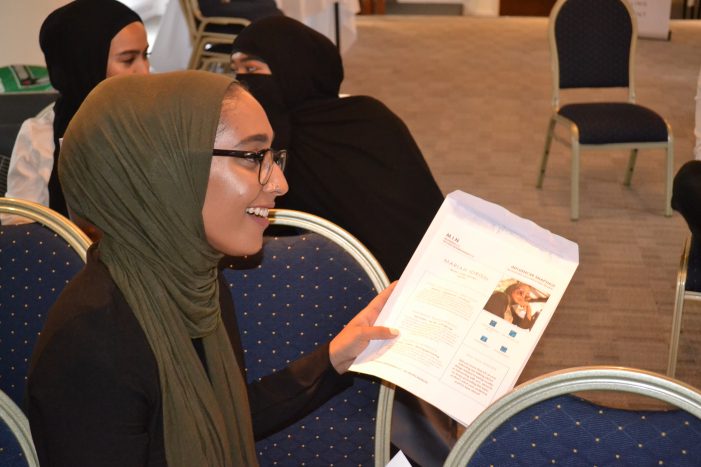 “I had no clue about any of this,” says Youtuber and rapper Shakeel Romero. “Yeah,” says Mariah Idrissi. “I didn’t know a lot of this.” As they pass around the paper for each other to look at, the comfort levels increase even more.

The importance of Muslims on social media

Khaled Siddiq, now feeling so positive, comfortable and upbeat about the whole event, nudges me, “Omar, I feel really strongly about what’s happening here. I need to head off for a performance but I want to go up and say a few words.” “Go for it,” I urge. Impromptu, Khaled, feeling somewhat inwardly compelled to address everyone, taking the metaphorical stage, shares his feelings about the importance of these types of meetups. He delivers a 5-minute heartfelt talk, before leaving and taking Mikhaael Mala with him (I would normally go with him as his manager, but my priorities were, of course, on the event).

Earlier this year, there was a video which went viral (I’m sure most of you reading this would have seen it or heard about it). It was of Ibn Ali Miller, a young, black American based in New Jersey who broke up a fight between two teenagers. The way he handled it and subsequently got them to shake hands was praised by the likes of Lebron James and Snoop Dogg.  Ibn Ali has gone on to become a non-violence, peace-promoting social activist, speaking across the world, and we are fortunate that we know him. We show the room an inspirational video of him which he pre-recorded and wanted the Influencer to listen to.

“That was a really nice touch,” says Ali Official, once it ends. “Next time, I think I’m going to get up and say something myself.”

The Importance of Muslim Influencer Marketing to Businesses

The day is wrapped up by presentations by myself and the other two directors, Saif and Mubin – we talk about the power of Influencer marketing. How, for example, Influencer marketing can generate more than 9x the return as compared to traditional marketing and why the ‘Muslim Pound’ is so strong and valuable to a business today.

Before the day ends and food arrives we play a game.

A game that united

‘Who’s played the country game? You know, the one where you start from A, then B, then C, and you have to go around naming one country each.’ Games normally highlight division, but ours showcased the beauty of unity. 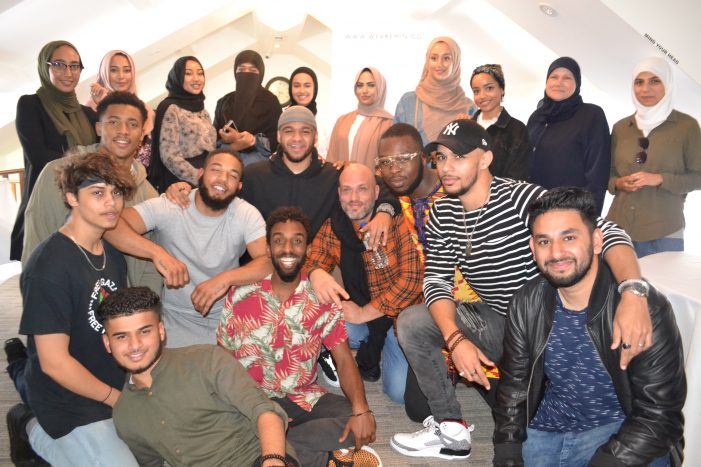 Our Influencers get together for the routine selfie

The Purpose: To Empower Muslim Influencers

Throughout the day, there were lots of ideas that were shared, and our Influencers were able to express their thoughts and communicate how we can all come together to better serve others.

The atmosphere was electric and the air was filled with a lot of love, unity, respect and compassion for one another.

An event that was the first of its kind. With stars from across the world, we managed to pull off quite the lineup. Bringing such a wide range of talents, all from different fields, was a truly unique thing. And what we witnessed was an awesome sense of unity and togetherness.

It was inspiring to see such amazing energy, passion and talent fused together in one room. Through this meetup, we were fulfilling one of our purposes: bringing Muslim Influencers together so they can feel part of a network, a community and a higher purpose.

M.I.N recognises the huge reach and the great platform Muslim Influencers have. Therefore we want to do our best to empower them so that they can go on to communicate whatever they feel passionate about in the most effective way, one which is true to them and their faith.

M.I.N works with, and has access to, leading Influencers from all over the world, which means that we can tap into different cultures, peoples and lifestyles.

Supporting Muslims in positions of Influence

A key aspect of M.I.N is empowering our influencers, providing them with the necessary support, tools and spiritual education so that they can truly succeed. 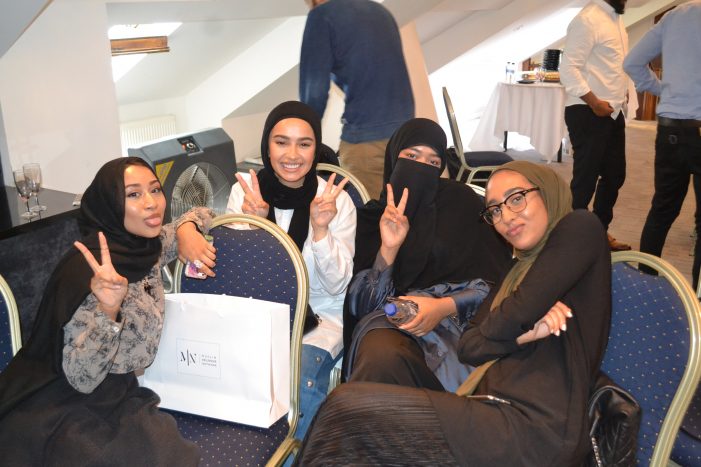 “We live in a very online world. We all know each other from online, and even though that’s great, but we can’t lose sight of the reality that being with each other in person is the most important. For example, it’s only when we come together like this can we talk about our struggles and see how we can help each other. There has to be an end goal, something deeper and more meaningful to what we’re doing, and gatherings like this help achieve this,” says Mariah Idrissi. 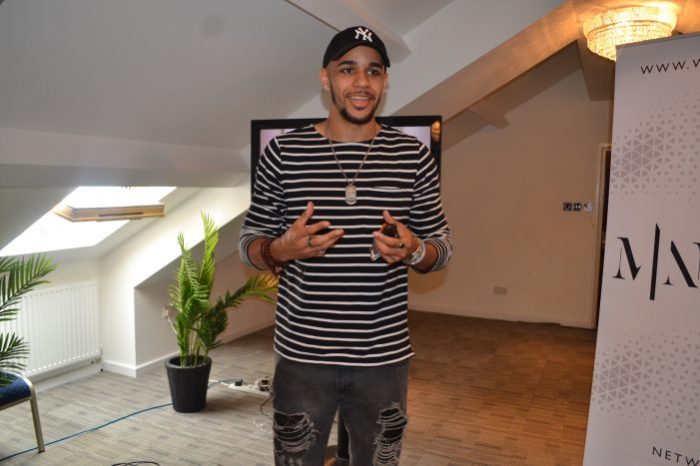 Khaled Siddiq commented on the event: “Events like these are so important, I pray they happen more often. We need to come together like this.” 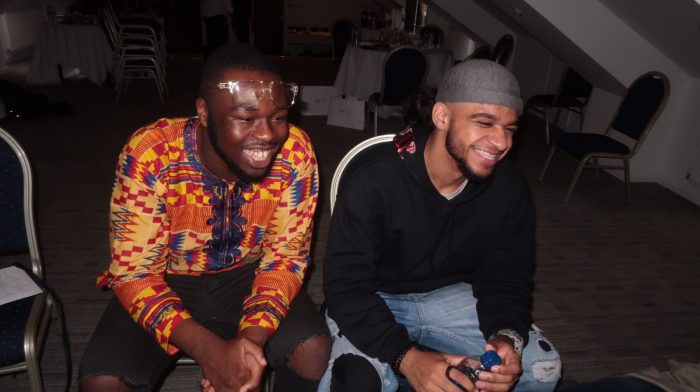 Prince Umi said about the event: “I think events like this make us realise that you’re not alone, there are others just like you, with the same mindset trying to make change to the world.”

For more photos and videos to see how the event unfolded, don’t forget to check out our M.I.N Instagram where we’ve shared more content for you =] 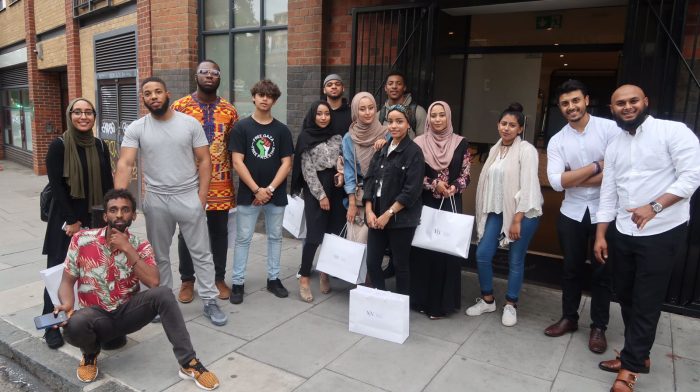 Some of the Influencers and a few of our team members gather together for a collective memory.

Omar, a former journalist for the Times and agent to global nasheed stars, is Head of Influencer Relations at M.I.N. He also has a deep love for all things rice. Follow him on Facebook here.