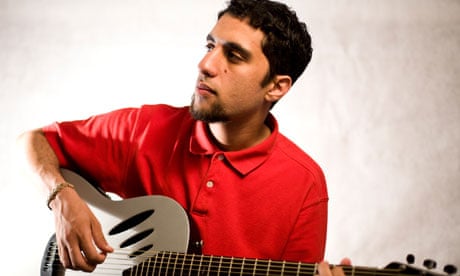 
There is something slightly different about the version of Chris Brown’s With You sung by Raef, a new signing to Awakening Records. In his rendition, Raef replaces Brown’s lyrics expressing love for a woman with his love for the Lord. “My Lord, no one else will do/ With every test you put me through, miracles you help me do/ If I have you, I don’t need money, I don’t need cars, Lord you’re my all.”

“There is a huge thirst from people who want to listen to music which is not of a detriment to their heart, soul or relationship with their Lord,” says Raef, of the music he and his fellow artists are producing at Awakening. “People have been waiting and yearning for it.”

Raef will be one of the artists performing at the Hammersmith Apollo on Saturday night at an event called Send a Little Hope, for the charity Save an Orphan. Awakening’s artists will be collaborating for the first time, and will feature Maher Zain, 31, a Swede of Lebanese heritage, possibly the biggest name in the Islamic music industry; Hamza Namira, 31, an Egyptian musician who shot to prominence with his song El-Midan (The Square), a song in solidarity with the Egyptian revolution; Mesut Kurtis, a renowned Macedonian Islamic singer of Turkish origin, and others.

As well as the Brown cover, Raef, 29, has produced Islamic versions of Rebecca Black’s Friday, Bob Marley’s Redemption Song and Michael Jackson’s Man in the Mirror – though the last two have no changes to the lyrics, because they are seen as positive and inspirational.

Awakening, which has its UK head office in Swansea, began by publishing books, but, spotting a void in the music industry, it hasn’t looked back. “Our ideas and music were fresh, our standard was the western standard,” says Wali-ur Rahman, one of the founders of the company.

“We wanted to raise the bar and compete with our western contemporaries, as most other nasheeds [Islamic music] was cheaply produced.”

Traditionally, music has been something of a controversial topic in Islamic jurisprudence, with many Muslims believing it to be prohibited. However, Awakening’s slogan – “faith-inspired and value-driven” – elucidates its aim: religious music promoting morality.

“We were the ones who promoted this type of music and we made it more universal,” Rahman says. “The reaction has always been mostly positive but there is always the issue of ‘music’. It is generally more accepted than when we first started. Now, we appeal to not just religious Muslims, but secular ones too – they’re not just listening to it, they’re enjoying it.”

However, there is an obvious lack of female role models for Muslim girls, and a female addition to the record label would, for many, be a welcome move, despite being another contentious issue in Islamic jurisprudence. Melissa Melodee, a singer and rapper based in the UK, and a convert to Islam, says she has faced criticism for her music. “The music and messages we [Muslim women and girls] are sending out are all positive – we aren’t encouraging people to do bad.”

In 2003, Awakening signed its first artist, Sami Yusuf, a British Muslim singer of Azerbaijani origin. Yusuf was described by Time magazine as “Islam’s biggest rock star” after the success of his first two albums Al-Mu’allim (The Teacher, a reference to the prophet Muhammad) and My Ummah (My Muslim Community). The albums went on to sell 3m and 4m copies respectively and set the bar for the burgeoning Islamic music industry.

“When Yusuf released his first album, we weren’t prepared for it – it was instant success. We used to host our music videos on our website, but it kept crashing because of its popularity,” Rahman says. In 2008, however, Yusuf had a dispute with Awakening over his third album and later joined the British record label ETM International.

As Yusuf left, Awakening signed Zain, who had been on the brink of stardom in the music industry in the US in 2007, working with RedOne, a producer who has collaborated with Lady Gaga and Jennifer Lopez. But he had a change of heart. Finding the music industry “empty”, he began to practise Islam seriously and signed to Awakening. His first album, Thank You Allah, catapulted him to celebrity status in the Islamic world, and he has just released his second album, Forgive Me.

Zain’s latest single, Number One for Me, a song dedicated to his mother, received 1m YouTube views in just over a week. “I’ve seen that people want to hear good music but with a positive message. We are trying to provide more of that,” he says.

Raef, too, is critical of more mainstream music. “The main reason I picked up a guitar was out of frustration, because a lot of the music I heard on pop stations was not helpful for spiritual growth,” he says.

The record label has provided an opportunity to listen to halal, “clean”, music for those who require it and, consequently, has had a profound impact on many young Muslims, particularly in the west. “They [Awakening’s artists] sing of the love they have for God and Prophet Muhammad, peace be upon him; it’s so spiritual and beautiful,” says Nuzhat Ahmed, 25, a student at City University in London. “The words have such a deep meaning, sometimes it brings tears to your eyes. Instead of listening to rap, it’s better to listen to the likes of Sami Yusuf and Maher Zain.”

The record label plans to extend its audience further. “We are hoping to break into India – there is a huge market there,” says Rahman. At present, Awakening has little competition, but he adds: “We would like to see more Awakenings. People are trying to compete, which is good: it will only raise the standard even higher.”

And it is not just Muslims that these artists hope to appeal to. Zain believes his second album will have a wider audience. “I think it can,” he insists. “Certain aspects can reach out to new people.”

In One Big Family, he sings: “No matter how far we are/ Even if we don’t know each other/ You and me, me and you, we are one.”

Originally published on The Guardian

7 Key Business Lessons to Take Into 2019

Anyone can set up a business.

It doesn’t always require much.

But not everyone can run a successful, strategic business.

One of the reasons is because not everyone has the passion and strength to endure hardship and failure.

Business is for the thick-skinned.

And that’s something we’ve definitely learnt in 2018.